I guess I missed the early warning signs!

Pre-Mortem Prelude ~ There is no easy way to say this, so I’ll just say it. I have been diagnosed as having stage 4 ODD. I don’t know how long I have. What I do know is that my only regret is that I have but one life to give for my readers…and our Government is working on the cure! 😉

David Rhodes is the President of CBS News. His brother Ben Rhodes is “Assistant to the President and Deputy National Security Advisor for Strategic Communications and Speechwriting.” Sharyl Attkisson is an award-winning journalist who worked for CBS News and resigned on March 10, 2014 because of “the network’s liberal bias and lack of dedication to investigative reporting.” Retired Air Force Brigadier General Robert Lovell was at his post on September 11th, 2012 waiting for the order that never came.  Are you with me so far?

There are two trains leaving the same station bound for two distinctly different destinations. The first one to arrive wins! I will tell you that Ms. Attkisson and General Lovell  are on one train…let’s call it the T train; and the Rhodes brothers are on board the other one we’ll call the P train. Here is what those of us who have yet to purchase a ticket ought to know before we decide which train we should take:

Hint– It is not necessarily the one that arrives first.

The #1 Passenger Concern– T Passengers want to know the truth.

We now know, due to the work of these people, that the White House deliberately mislead (lied to) the American People on the eve of the 2012 Presidential Election. In the process, they insulted the honor and integrity of the US Military, knowingly incarcerated an innocent man and, perhaps worst of all, they intentionally obstructed the pursuit of justice in the murders of 4 young American men in Benghazi for their own political gain.

When Bill O’Reilly pointed out the “Rhodes Connection” to a visibly uncomfortable White House FOX journalist Ed Henry, Henry voluntarily characterized them as “honorable men” which struck me as odd at best, and subterfuge at worst. The passengers on the T train, as Traditional Americans would see nothing honorable whatsoever in those who lie, collude and cover up for political gain…especially when one of them is supposed to be the watchdog! And that’s just for starters.

The T train destination is the complete restoration of constitutional government, separation of powers, the rule of law and the full prosecution of those who have violated the same, put our national security in grave peril and sold us out to the Globalists.

The #1 Passenger Concern- P’s need to arrive before the T, regardless of what it takes.

In order for the T train to reach its destination, its passengers need to do whatever it takes to uncover the truth and respond. The P train passengers, on the other hand, must do all they can to stop them. This includes prosecuting Whistleblowers, using the IRS to intimidate, Political Correctness to silence and Racism to distract.

Any of us fortunate enough to make it through their gauntlet will then face the prospect of unlimited detention without benefit of our constitutional right to due process!They already know who we are and what we do. They are monitoring what we say.“Psychiatrists are now identifying those who express their frustrations with the government as a mental illness called Oppositional Defiance Disorder (ODD) as per the official Diagnostic and Statistical Manual (DSM-V). Under the new proposal from Senator Markey defiant thoughts or ideas could potentially not only leave you diagnosed as mentally ill, but also a “hater.””And they are real close to controlling where we go!

You may have already figured out that the P train destination is complete control over everything and everyone. Period! This is at the heart of every P train “Progressive” scheme under the sun from Climate Change & Obamacare to Common Core and Gun Control. We want the Truth. They want Control and they need to hide the Truth in order to take it!

Braking News!!!- This just in! This man has just been tapped by Speaker Boehner to Chair the “Special Committee” to get to the Truth in Benghazi! Now that I think of it, Speaker Boehner’s announcement to form the committee last week was P train-“braking” news. Putting Rep. Trey Gowdy in charge could actually be P train-“derailing” news!

Many of us on the T train understand that there is something far more sinister and nefarious than a Watergate style cover-up where nobody actually died. I believe this committee has the potential to “derail” the P train because it will find a T with a “reason” on the end of it. T-R-E-A-S-O-N! As the author states, “One lie too many”!

The beauty of all this is that while the uncovering of this lie is slowing down the P train, it is firing up the engine of the T train with all kinds of questions. If Obama wasn’t in the Situation Room on the night of September 11th, 2012, where was he? Where are the 2 dozen Benghazi survivors? Why has Leon Panetta been in hiding? How come Obama never speaks out about specific Islamic atrocities such as the burning of over 80 Christian churches in the Middle East and the kidnapping of 200 Nigerian girls? To what extent has the Muslim Brotherhood infiltrated the highest levels of our government and the FBI? 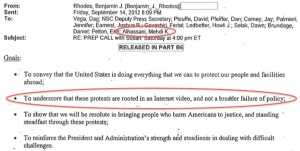 “The ‘smoking gun’ email that reveals who instructed Susan Rice to blame the Benghazi attack on a video also exposes a recipient named Mehdi K. Alhassani. Alhassani was the leader of the Muslim Student Association (MSA), a Muslim Brotherhood front group.”

Why don’t we know where the Commander in Chief was on the night of September 11th, 2012? I’d say this is the burning question on board the T train. And I think the T’s need to pull Panetta, Mullen and Petraeus out of hiding too if we really want to see this train fly!

As far as my ODD goes, I’ve reconciled myself to accepting it gracefully and treating it with herbs and natural supplements (I don’t trust their doctors any more!)…and I really don’t care how long I’ve got…I just know we need to make it to the station.